Geo-Location Based Applications At SXSW: Whatser –> Making a City Your Own 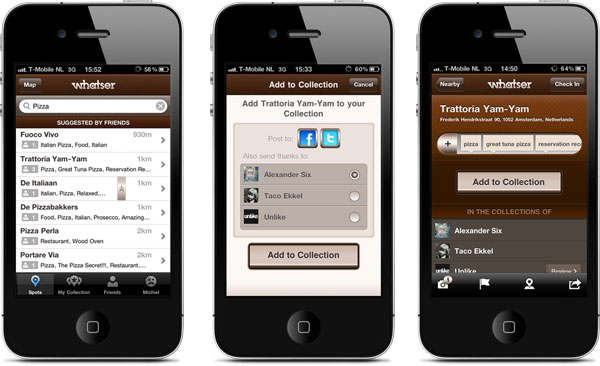 Something funny happened on the way home from the Mall. I lost my computer charger. It’s a MAC. So I had to get to the Apple store in the Mall outside of Austin. Someone told me the Apple Store here near SXSW was only selling the ipad and the line was from here to Los Angeles…

As I was leaving the Mall’s Apple store, two gentlemen with SXSW Conference passes approached me. They had their own reasons for having gone to the Mall. And wanted to know if they could hitch a ride back.

There were NO taxis for miles around…And walking back to the conference wasn’t really an option! Of course I said yes… as long as I could interview them on the cab ride back. They agreed. So below is the interview with the Founder of Whatser, a Geo-location-based application out of Amsterdam.

If you want to know where to go for breakfast, where can you dance all night long, where to find that perfect outfit, where to hold a wedding, where to find the best deal… Michiel Verberg’s app might just be the right app for you and they have updated it since it’s release in November 2010 release. Here’s the cab interview… apologies if it is a bit bumpy… but you have to admit, I am making the most of my time here at SXSW!:

There seem to be a lot of applications like this out there. Does anyone have a Harvey Ball chart? with Features, Functions and Benefits? Comparison? Love to see that! Wondering which ones will win out in the long run! For more information on this application: