Want to Know More About Machine Learning and AI? 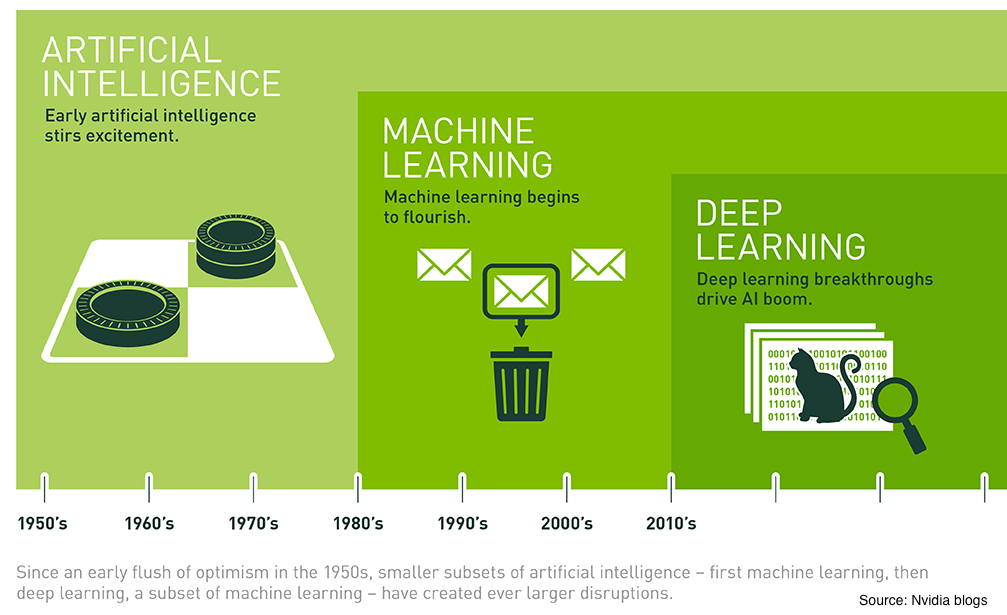 Wondering whether you should invest in AI and Machine Learning? That’s a question that the most innovative companies are considering. Why consider it? One good reason is because your competitors have already started. If that doesn’t give you some reason to get motivated, I hope you get started before you are put out of business. To make sure that doesn’t happen, there are  a few things to consider to help you start to explore an investment in machine learning.

Of course, as with any business initiative, you’ll want to create value. And this can be done using machine learning systems. But for those systems to provide value, companies will need to begin by evaluating their organization’s data maturity, but more importantly their readiness to accomplish its data-driven goals. Company’s need to start with an audit of their data warehousing, data scientific research capabilities, data governance and data hygiene. In addition, it’s important to look at the sources, uses, volume, and veracity of all your date, meaning your first-, second-, and third-party data.

Garbage in, Garbage Out

Why is making sure your data so clean? Machine learning is basically taking a computer and making it smart enough to learn from the data it’s fed. We are essentially programming machines to learn. The goal is that after a certain point of time, the computer is able to predict further data. How so? Let’s pretend you want to make your computer predict the weather. So to begin, you might feed the computer weather reports of every hour of every over the past year. What you might end up with is– because the temperature (z) depends on day of the year (x) as well as the time of the day (y), more than two-dimensional curve. In fact, weather is random, so the equation generated by the computer won’t just have 3 variables (x, y, z), it may also have higher powers. So depending on the number of factors in a prediction and the randomness of the outcome, the complexity of the curve can increasingly get more complicated.

So back to the data… And I know you know the story about data: garbage in, garbage out. So hopefully, now you see can why good, clean data is so important to prediction. As the computer is taking the data you feed it to make future predictions, those predictions dependent on the data you are feeding it. So you want the very best data possible. And it takes super computers which are capable of handling large volumes of data, as well as the ability to learn fast and to make fast decisions based on the learning it under goes.

AI and ML Are Not The Same

Applied AI is far more common. Applied AI is about systems designed to intelligently trade stocks and shares or drive an autonomous vehicle. Generalized AI is may up of systems or devices that, in theory, can handle any task. And are less common. However, this is where some of the most exciting advancements are happening today.

Deep Learning is A New Area of Machine Learning Research

It was introduced with the objective of moving Machine Learning closer to one of its original goals: that of being Artificial Intelligence. So essentially Deep Learning is a subfield of machine learning concerned with the algorithms inspired by the structure and function of the brain called artificial neural networks. Deep learning has worked it’s way into business language via Artificial Intelligence (AI), Big Data and analytics. Deep learning is an approach to AI which shows great promise when it comes to developing the autonomous, self-teaching systems which are revolutionizing many industries.

The Two Big Ideas: It May Be Possible To Teach Computers to Learn and The Internet is a Source of a Ton of Data

Arthur Samuel, in 1959 is credited as the one who came up with the big idea that it might be possible to teach computers to learn for themselves. That would be in contrast to teaching computers everything they need to know about the world and how to carry out tasks. The second big idea was that the Internet, with huge increase in the amount of digital information being generated, stored and could be used for analysis. So the scientists and engineers realized it would be far more efficient to code computers to think like human beings, and then plug them into the internet to give them access to all of the information in the world.

Neural networks are a set of algorithms, modeled loosely after the human brain and designed to recognize patterns. The development of neural networks has been key to teaching computers to think and understand the world in the way we do, in addition to the innate advantages they hold over people such as speed, accuracy and lack of bias. So a Neural Network is a computer system that classifies information in the same way a human brain does. It can be taught to recognize, for example, images, and classify them according to elements they contain. It works on a system of probability – which means that based on data it’s fed, it is able to make statements, decisions or predictions with a degree of certainty. The addition of a feedback loop enables “learning” – by sensing or being told whether its decisions are right or wrong and then can modify the approach it takes in the future.

What Can Machine Learning Applications Do?

Machine Learning applications can read text and work out whether the person who wrote it is making a complaint or offering congratulations. They can also listen to a piece of music, decide whether it is likely to make someone happy or sad, and find other pieces of music to match the mood. They can even compose their own music expressing the same themes, or which they know is likely to be appreciated by the admirers of the original piece.

These are all possibilities offered by systems based around ML and neural networks. The idea is that we should be able to communicate and interact with electronic devices and digital information, as naturally as we would with another human being. And another field of AI – Natural Language Processing (NLP) – has become an exciting area of innovation in recent years, and one which is heavily reliant on machine learning. (And yes, my initials just happen to be NLP, but that doesn’t really mean anything… just a happy coincidence…)

Take Google for instance. Google is using it in its voice and image recognition algorithms. It is also used by Netflix and Amazon to decide what you want to watch or buy next. And it is also being by researchers at MIT to predict the future.  While Machine Learning is often described as a sub-discipline of AI, we might look at Machine Learning as the state-of-the-art of AI. Why? Perhaps because it is showing the greatest promise to provide tools that industry and society can use to drive change.

More on the practical uses of AI and ML in the future. For now, noodle on that!