What’s the Number One Number Thing Today’s CEO’s Must Do? Do the OODA Loop Faster and More Innovatively 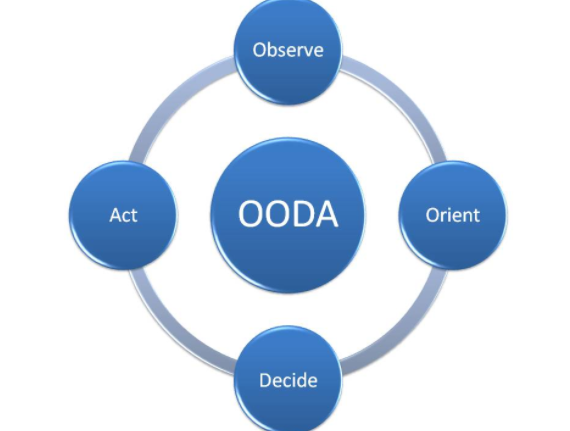 What’s the Newest Requirement for a CEO? Do the OODA Loop Faster and Better!

You would think it would to generate revenue, profits and reduce costs. Think again. It’s all about iterating and pivoting like a start-up. And who better than a former fighter pilot to teach CEO’s a thing or two about making quick. So I want you to meet John Boyd, who was among many things, a military strategist, colonel and fighter pilot whose theories are highly influential in the military, sports and business.

So why bring up Colonel Boyd in the context of CEO’s and their need to be nimble? Because investors and boards have transitioned from desiring quarterly profits (something that has driven Wall Street and corporations for many years) to searching for leaders to those who have the ability to disrupt their industry or die. What did the fighter pilot, Colonel Boyd used to make those decisions to do something out of the ordinary? He created a framework known as the OODA Loop:

Above is a video from Ralph Mroz on the OODA Loop as applied to business if you want more information!

As a fighter pilot, John had to make decisions in nano-seconds. With this framework of observe, orient, decide and act he way able to describe a way to iterate and pivot, very quickly, and decide if the object in front of them is friend or foe. Not doing so could mean life or death. It could also mean the end to a critical mission.  What does the OODA Loop mean to a CEO? Iterating and pivoting is also mission critical. Just ask the CEO of Ford Motor Company, Chief Executive Mark Fields. He was a 28 year old veteran of the business and was replaced by someone the business thought would be able to disrupt the automotive industry very quickly!

The Message is Simple: Do the OODA Loop Faster or Die

While Mr. Field’s did what most board’s used to expect of a CEO’s, i.e., he returned consistent profits, he did’t make enough changes fast enough. His OODA loop was too slow. But he didn’t know what he didn’t know. He, as many other CEO’s don’t realize that the winds of change are changing all around us. Like in most any industry, the car market has entered into the era of transportation.

It’s no longer just about building and selling a car. It’s about car-as-a-service. Think: ride-sharing (think Lyft, Tesla and ReachNow (by BMW.) It’s also about taking the traditional gasoline engine and transforming it’s power source to be an electric vehicle. And it doesn’t stop there. Some companies are disrupting the industry by experimenting with self-driving technology, making investments in connected cities (think BMW and Santa Monica, CA.) And at the same time Ford’s stock sank.

How Fast Does Your CEO do The OODA Loop?

How fast do decisions get made? How fast can the ship be turned? Today, with the need to act quickly, the message is simple. We are in an age of rapid disruption by the software and tech industries. A leader of any company has to pick up the tempo and make riskier bets sooner… or die. While it was Mr. Field’s intention to set Ford on a path to be part of the new, emerging auto industry, he just didn’t do it fast enough.

Since Mr. Field’s took over three years ago, the share price of Ford is down 40%. As a CEO, as yourself, “Are you disrupting yourself, your company and your products fast enough? Are you really changing anything or are you just doing the old stuff just faster?” These are not easy questions, but ones that we all need to contend with. Consider you are one company and your are disrupting yourself faster than your competitor. What happens to the competitor?

As a CEO, Are You On Track?

In military operations, OODA loops takes place in nano-seconds. In corporations, its decisions are often slower. In the old days, strategy was rigidly followed till next years’ planning cycle. But today, that’s no longer an acceptable mindset. And it’s critical to validate we’re on track and if not, correct it. Using a model like the OODA Loop, along with design-thinking which requires to you go and talk to your customers, your employees, customer’s of your competitors, to industries that are similar to your and industries that have nothing to do with yours.

It’s where the kernel of the seeds of innovation are hatched, born and grown into a full idea. The results of your actions become the observations to re-orient you to make your next decision. Quickly repeating the OODA loop equals success. And as you are doing this, you want to make sure you are making real-time changes that are just changes to make changes, but change to create a “Blue Ocean Strategy.” As defined by the author’s of the book, Blue Ocean Strategy, CEO’s need to quickly create an uncontested marketplace, where the competition is irrelevant.

Who’s Slow to the OODA Loop?

According to the article by Christopher Mims of the Wall Street Journal, Ronald Boire of Barnes & Noble, GNC Holdings’ Mike Archbold and top executives at three of the six major Hollywood studios making changes faster is very important. Where to look for inspiration? According to Mr. Mims, unlike large corporations, startups don’t need decades to make the changes the businesses need to succeed in the new world. They are nimble, they are always iterating, pivoting, changing, trying new things, not being afraid of conflict…

What does this mean for established companies? They will need to take drastic measures to do the OODA loop faster. What kind of drastic measures? According to the article, these CEO’s must be willing to tell their stakeholders they may have to lose money and cannibalize existing products and services, while scaling up new technologies and methods. Not the same old dog chow most CEO’s having been dishing out.

How Can a CEO Get On Track?

It used to be that you could acquire the start-up that was trying to put you out of business. But in today’s market it takes more than that. Companies that are disrupting the marketplace are growing so quickly, capturing so much market share, they don’t want or need to be acquired. And they can become too valuable to buy or are unwilling to sell. So the questions for you, as a CEO, “Is do you have systems to monitor/measure what employees know, think & feel about what is going on in the business?”

They are often the ones on the front line that really know what is going on and what needs to be done, or at least what isn’t working. “Do you really know what your customers know, think & feel? Or do you have a cordial relationship where the “real deal” is not really discussed?” Honest, conscious conversation is where it all starts. Many people have made careers by learning how to manage-up well. That’s not a bad thing, except when you aren’t telling the CEO the truth about what the troops think, feel and know. But there has to be a cultural environment that always you to be able to safely say the things. That’s not always the case.

And, as a CEO, “Do you take that information that you have gathered from your employees, your customers, all kinds of sources and integrate it into your company?” One of the best ways to stay on top of the game is to monitor social and digital media. If you have a digital / social media command center, where all the top news and information is brought into one central place, you can begin to digest a new picture of the quickly changing landscape very easily. You’ll also want to keep your ear closely attuned to what is happening in the start-up world, regardless of whether it is Silicon Valley or Silicon Beach or Silicon Edge or…

The More Things Change, The More They Stay The Same

To me, all of this sounds like something very familiar to those of us who came from the voice of the customer or quality. Remember Deming, the father of Quality who was pushed out of the American Auto Industry? And then only to be invited to Japan and make their automative industry soar? What was his secret sauce? To listen to their customers and the employees. To make really changes to their products and services based on that feedback!

Today, companies must incubate disruptive ideas within their own corporate cultures. And this is not easy, because often it means supporting them as they grow into something truly disruptive. The company might have to absorb their losses. For example, for its first 20 years Amazon made almost no profit. But iterating, pivoting and incubating is not enough. A CEO must maintain the existing business at the same time as they innovate. This is a new and rare skill.

So where best to learn how to think like an OODA Loop CEO? Find a group that help take you through thinking differently, through a design-thinking process where you never know what will come out of it, but it always spurs innovation. You have to cross the chasm, from how you normally do things, to how things have never been done before. That’s a lot of change, so it’s also important to develop those ideas and new innovations in the culture where change and honestly is accepted and appreciated.

VP, Program Executive, in the Innovation and Transformation Center