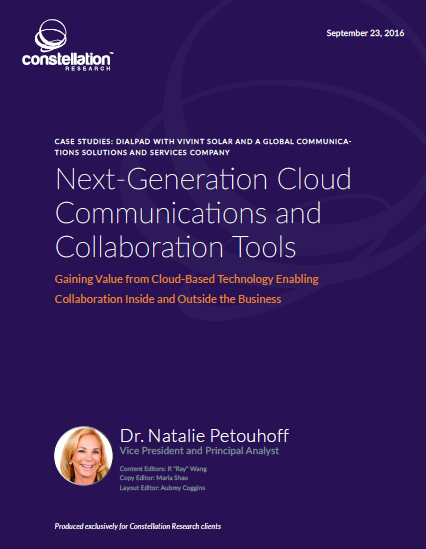 The only way to build a truly innovative and collaborative culture is to give everyone a voice. In working with Dialed, I just completed some ROI research to understand how quickly, easy and affordable it is today to plug every employee into your business with a very innovative phone system. They way it works is that Dialpad turns all of your devices into your business phone, letting you make high-definition calls over Wi-Fi or your carrier network from anywhere. And businesses can let their  remote workers and global offices feel like a part of HQ with peer-to-peer HD video. This is especially great for field service, where video often can solve the problem like no other solution because you can SEE the issue. In these new systems, modern business communications integrate seamlessly with the productivity apps that employees use every day, making it easier than ever for them to collaborate with docs, emails, and calendar invites.

With this system, a brand can move a phone call from their WiFi to their carrier or from a desktop to a mobile device very easily, so in essence it is very easy to switch calls from device to device (phone, tablet, desktop…) It is also easy to transfer calls between colleagues or departments simply by looking up a name in the directory.

In the ROI research we interviewed two companies, Vivant Solar and a large communication services provider to see how they transformed their on-premises telephony systems to a purely cloud-based communications solution using Dialpad. The change, depending on the situation, resulted in six- to seven- figure cost savings. Both companies previously had legacy, on-premises PBX (Private Branch Exchange) technology, which is a private telephone network used within a company.

Dialpad provides a secure, enterprise communications cloud solution that incorporates traditional PBX features into a modern cloud-based, business communications VoIP system. The solution integrates with Google Apps for Work and with Office 365, with a user interface built to satisfy the needs of a modern workplace but without the typical costs of traditional enterprise, on-premise telephony systems.

The platform offers messaging, voice, video, conference calling in the cloud, attributed call transfer, auto-attendant, IVR, business SMS, MMS, and group messaging, call recording, live-call device switching, international outbound calling, local telephone numbers, multi-device functionality, toll-free numbers, visual voicemail, contact profiles, a company directory and fax support as well as core social profile applications, such as LinkedIn and Twitter for context about the caller. In case you are wondering, has anyone else discovered this service, Dialpad’s customers include 60 percent of the Fortune 500, high-growth enterprises, and forward thinking organizations and start-ups. The service is built on the WebRTC framework and runs on a redundant global network of nine data centers on four continents.

In the evaluation of various technology infrastructure systems, Mike Hincks, Director, IT Infrastructure at Vivint Solar, found that traditional IT voice systems come with hundreds of thousands of dollars of yearly infrastructure and hosting costs, all designed around employees using desk phones. The catalyst for change was to use a system not tied to a desk phone. One of the many interesting features was that Dialpad had no upfront capital expenditures or maintenance costs, which made it easier to get the technology approved by senior leaders at Vivint Solar.

In addition, Hincks looked at the money the sister company was spending on long-distance contracts. With Dialpad, there were no long-distance carrier costs. Hincks also looked at the cost of the team he would need to hire in order to maintain an on premise, hosted solution. The sister company had had a five-person team to manage voice applications. In addition, Hincks would have needed to schedule the IT team’s time to provision a new phone for each employee, with at least one hour of training per employee and some additional time from the IT team for troubleshooting. Dialpad required less than one full-time equivalent employee.

Another one of the biggest conveniences was that Dialpad integrated with Google for Work without any authentication process. “I found the Millennial workforce wants technology to work right away. They don’t want to set up an application, have to go through training or troubleshoot it. They want to click on an app and see it work immediately,” said Hincks.

The positive feedback about Dialed from Vivint Solar’s more than 4,000 mobile workers includes:

The ROI: Costs were reduced by several hundred thousand dollars, year over year. Savings came from:

In the second company, the Director of Digital Workplace Technologies set up a proof of concept (POC) with Dialpad. He found that the best way to meet the needs of workers in the modern enterprise was using cloud technology. He wanted to re-conceptualize how communications services could be presented to users and to eliminate deterrents to productivity, especially for the geographically distributed workforce that used telephony systems. The Director of Digital Workplace Technologies said, “It was important to look at an IT project as an organizational change management project. We learned this lesson when we moved our users to Google Apps for Work. Technology changes that affect how productive workers are should be seen as organizational change projects. If you can’t find something you are looking for, it makes you less productive and frustrated. So we always overlay organization change management with our IT rollouts.”

The company needed to have a new communications system that could be completely up and running in minutes, compared to months or even years required for deploying global on-premises systems. Applications built in the cloud reduce costs because they are more flexible, extensible, and easier to work with while making collaboration intuitive. And this company found organizational change management was a key element for a successful implementation of this new communications system.

Using Dialpad, the company was able to retire several of its old telephony systems and realize millions of dollars in cost savings by reducing:

Today, the company has deployed about 6,000 VoIP lines on Dialpad, which cover about 40 percent of its global employee base. It is looking to expand coverage every quarter. The company’s savings were several million dollars, year over year. Savings came from:

After implementing Dialpad at just one large site, the global company reduced the site’s cost per minute of call time by double digits. In addition, the new system offered features that the old telephony systems could not. For instance, the PBX system had been tied to a particular device – the desk office phone. However, most people are now mobile, working from various devices and remote locations. Clearly, workers could not take their desk phones outside of their offices. When workers were away from their desks, they had to use cell phones or other alternatives – from multiple phone numbers – that created additional costs for the company.

Dialpad, however, allows employees use to Voice over Internet Protocol (VoIP) telephony. When the company moved to Dialpad, employees could use their computers to place calls, essentially replacing desk phones. They could also use the Dialpad application on their Android or iOS mobile devices. To the person receiving the call, it all comes from the same phone number, whether the VoIP call is made from a computer or from a mobile device.

Employees could also become more productive. With the ability to communicate from any place, using any device, while still being accessible from a single phone number, people could connect with each other more easily. As collaboration was made easier, the ability for teams to work more effectively with remote employees was also improved. In essence, the company had a new potential to increase the agility and adaptability of its workforce. Employees could be more productive, collaborative and feel more connected to each other using Dialpad.

The new technology enabled the company to modernize its workplace. The company realized that it needed to give employees – as well as new hires and interns – technology tools that are modern, intuitive and easy to use, unlike traditional enterprise tools. The company found employees could easily pick up how to use Dialpad because they were familiar with Google Apps for Work. While moving to Dialpad, the company was also able to shift a portion of its traditional help desk activity to a self-service and community-supported model. In the community, users can ask influencers an guides questions.

WHAT YOU SHOULD CONSIDER IN CHOOSING NEW TECHNOLOGY

Hardware costs and desk phones traditionally have driven the voice communications industry. While struggling for decades to bring down hardware costs, providers attempted to shift to a software model that yielded some feature and cost improvements. However, these changes have not significantly reduced costs, improved scalability, boosted agility or simplified use. In contrast, a revolutionary, exponential change occurs in the telephony industry from using a 100 percent cloud based system designed with the user in mind that is extremely easy to deploy and use while slashing operating costs, eliminating call charges, and offering rapid, unlimited and affordable scalability.

At the end of the day, it’s really the employees that create the customer experience. And employees can’t do that unless they are given the right technology. It’s up to companies to evaluate the technology they are using and to provide them the latest technology that allows them to be their best. For information about this research study, you can find it here.