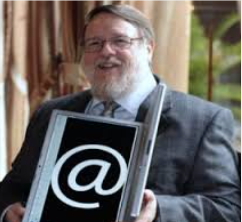 Raymond Tomlinson is noted for establishing person-to-person email as we know it. He was the one that allowed people to send emails to users on other computers by choosing the @ symbol. He considered an obscure keyboard character — the @ symbol —  to separate usernames from email hosts. Tomlinson came up with the idea while working for Bolt Beranek and Newman, the software company that developed the Internet precursor ARPANET, in 1971. He passed away died Saturday at age 74.

Tomlinson said in a 2012 profile in Wired, said “I looked at the keyboard, and I thought: ‘What can I choose here that won’t be confused with a username? They were all test messages, and whatever came to hand as I put my fingers on the keyboard is what I would send.”

The innovation earned him a place in the Internet Hall of Fame earlier in 2012.The Hall of Fame wrote when he was inducted, “Tomlinson’s email program brought about a complete revolution, fundamentally changing the way people communicate, including the way businesses, from huge corporations to tiny mom-and-pop shops, operate and the way millions of people shop, bank, and keep in touch with friends and family, whether they are across town or across oceans.”

There have been many articles on email is dead. But from my experience, most people in corporate America still use email. Today, tens of millions of email-enabled devices are in use every day. Email remains the most popular application, with over a billion and a half users spanning the globe and communicating across the traditional barriers of time and space.

What’s your thoughts on email? Is it hear to stay or not?