Innovation & Disruption In Delivery: Could Your Next Amazon Delivery Be By a Drone? 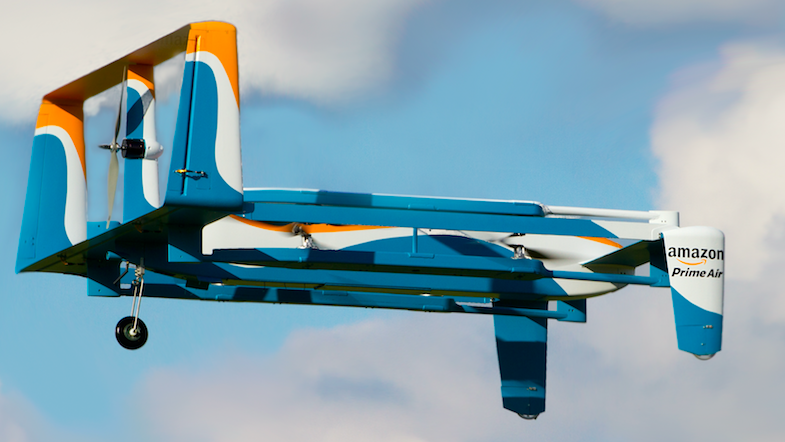 Ever Had a Package Delivered Late, Not at All Or To the Wrong Address?

One of the most irritating issues with ordering online is whether the package gets delivered and to the right address and on time. I know I’ve experienced this a number of times and what’s interesting is that, as customer’s we don’t always think about the delivery service as the issue, but rather it reflects poorly on the company we by the product from. How to fix this customer experience issue? One option is to deliver packages to consumers’ homes using drones. Could this allow companies to bypass the challenges with that last step of the delivery? It might be for delivery to people’s homes. It might not work at apartments, though, because the drone can’t get into the apartment building. Or can it?

What customers may not know is that the last leg of the delivery is the most expensive and inefficient part of parcel delivery. Customers don’t often think about that the product has to go from a store or warehouse, to the shipper’s delivery center and then from there, be deployed to the customer’s address. It is often not the place you bought the product from that is having the issue. It maybe who their delivery service or services are. It could be the individual who works for the delivery service. I know I personally had package delivered to an address that was similar to mine, but not mine. The individual was new to the delivery route and got mixed up. I had to run after the delivery truck, stop them and tell them they delivered to the wrong building. (I had gotten a text my package was delivered, but it was not on my doorstep or at the post office boxes for my building.) And since this happened more than once, I knew what had happened.

E-commerce companies, like Amazon, are using drones to speed up the this last part of the delivery process, while cutting costs. The result? Improving the customer experience, customer satisfaction and loyalty. And what’s interesting is even legacy retailers could take advantage of a similar process to grow online sales.

So What’s the Hold Up?

While there are many obstacles to overcome for instance, drone regulations, the development of autonomous flight and traffic control systems for drones, as well as consumer acceptance, there are companies actively trying to figure this all out. For instance, Amazon is working on drone delivery, depending on when and where they have the regulatory support needed to safely delivery packages. They want to use drones to deliver packages to customers around the world in 30 minutes or less. In fact, they have Prime Air development centers in the United States, the United Kingdom, Austria, France and Israel.

As e-commerce providers like Amazon look for solutions within their own company, many logistics providers are experimenting with drone delivery. These firms also seek to cut costs as well as ward off competition, whether it’s from startups, technology companies or e-commerce companies. In fact, FedEx is betting on automation to Fend off contenders like Uber and Amazon. The shipping giant is investing in autonomous trucks and is interested in delivery robots, drones and an Alexa app. And while there are attempts to get this right, those of us in the innovation space know that #failfast – iterating and pivoting is the key. In my book, it’s ok to fail. You can’t learn what you don’t know, you don’t know unless you try. Trying means you learn something each time. Though the concept of failfast is very popular today, if we look back at Edison, it took him 9,999 times to get the filament for the lightbulb to work on the 10,000th time. What if he gave up? We’d all be in the dark!

Amazon have started with a private customer trial, to gather data to continue improve the safety and reliability of their systems and operations. As they gather data, this will bring them closer to realizing this how to use this innovation for all their customers. Does weather affect the delivery? Currently, Amazon is permitted to operate during daylight hours when there are low winds and good visibility. However, they are not using it when it rains, snows or in icy conditions. They feel they need to gather more data to improve the safety and reliability of their systems and operations to expand the offering. They are working with regulators and policymakers in various countries in order to make Prime Air a reality for customers around the world.

Where Can you Find more Information On the Disruption and Innovation Drone Delivery Can Provide?

In a new report, BI Intelligence examines the benefits drone delivery can provide as an e-commerce fulfillment method. In the report, they look at the different approaches companies are taking to experiment with the new technology and processes involved in this new delivery process. In addition, they look at the key players working in the drone delivery space. And have researched the challenges drone delivery faces in reaching mainstream adoption.

As I was giving a talk on disruption and innovation, I had many questions from what would be considered very standard legacy firms. What they need to be careful of is being aware of the fact that somewhere, in someone’s basement or garage, someone is probably working on a project that will disruption their industry. It’s customary to do the ostrich: stick you head in the sand. But doing so will only make you a dinosaur, (extinct) if you are not careful.

Disruption and innovation are all around us. Just look at what happened to the taxi industry. Not only did Lyft and Uber transform how customers’ order, receive and pay for rides, but they disrupted an age old industry that had not changed for years. And take GM for instance. They make cars. But they decided to look at cars as a service and invest $500M in Lyft to be part of the cars-as-a-service industry.

Disrupt Yourself or Die

Instead of being one of those industries or companies that waits until an upstart disrupts their revenue model and takes marketshare, why not start innovating within your own company. Too many companies are complacent or don’t have the skills to think outside the box. If you don’t, it may want to seek out a firm that can you help you think through this new and confusing new frontier of design-thinking, innovation and disrupting yourself — as a company and as a person. No one wants to be the company that had the leg up on IBM and caused it’s own demise: i.e, nobody wants their story to go down like Digital Equipment Corporation: DEC.

“Digital Equipment Corporation achieved sales of over $14 billion, reached the Fortune 50, and was second only to IBM as a computer manufacturer. Though responsible for the invention of speech recognition, the minicomputer, and local area networking, DEC ultimately failed as a business and was sold to Compaq Corporation in 1998. The  fascinating modern Greek tragedy in book form by Ed Schein, a high-level consultant to DEC for 40 years, shows how DEC’s unique corporate culture contributed both to its early successes and later to an organizational rigidity that caused its ultimate downfall.” Don’t do a DEC.