How Companies are Building the Green Internet: GreenPeace Report 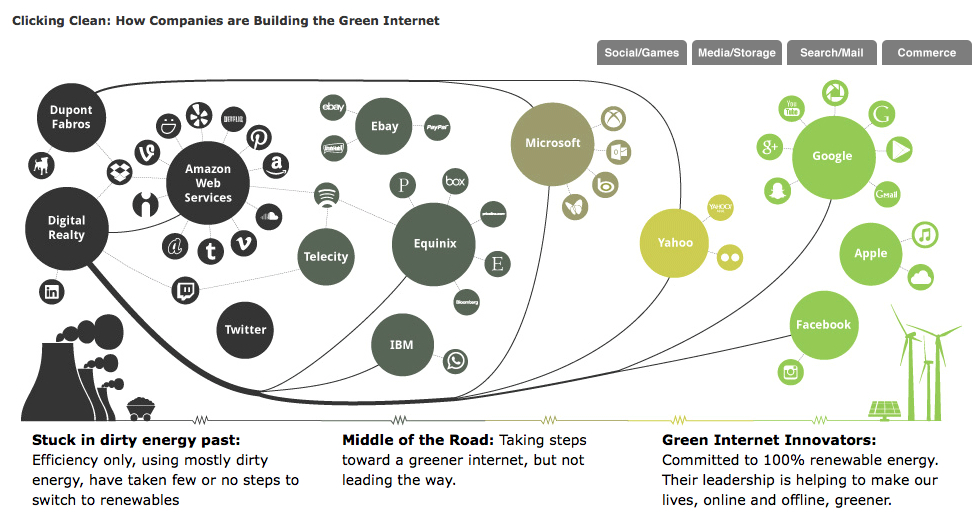 The GreenPeace Report puts technology companies into groups of energy use: Dirty Energy, Middle Of The Road and Green Innovators. As an analyst, we talk a lot about the newest types of software, computers and gadgets of which need energy to run. And there is real resurgence of entrepreneurial spirit, where people are looking to feel satisfaction from the work they do and make the world a better place, rather than just tolerating brain-numbing work for the sake a of paycheck, only to find enjoy somewhere else. With all the enthusiasm also comes a great deal of energy use that we may or may not be aware of.

According to the Kaufman Index of Entrepreneurial Activity (KIEA), the entrepreneurial rate in the U.S. is already well above the dot.com bubble of 15 years ago. From social media to music, streaming video, email and commerce, we are increasingly moving much of our lives online. But which companies are storing all of that data, and how are they getting the energy? Here’s who hosts some of the internet’s most popular sites and services in their data centers – and whether those companies are using dirty or clean energy. Find out how you can participate by following the hashtags #clickclean and download the full report and take action for a green internet.

Three Types of Energy As the expansion of technology is continuously accelerating, we are also creating a world where more and more energy is be required. There’s a term called Dirty Energy, which means the focus is only on efficiency and the company has taken few or no steps to switch to renewables. And the there’s the Middle of the Road, which are the companies that are taking steps toward a greener internet, buy not leading the way. And then Green Internet Innovators are the groups that are committed to 100% renewable energy. Their leadership is helping to make our lives, online and offline, greener.

Clicking Clean How Companies are Building The Green Internet

The Green Internet Innovators Here’s one of the companies that is on the side of the green internet innovators.  Apple’s aggressive pursuit of its commitment to power the iCloud with 100% renewable energy has given the company the inside track among the IT sector’s leaders in building a green Internet. Apple has made good on its pledge by building the largest privately owned solar farms at its North Carolina data center, working with its utility in Nevada to power its upcoming data center there with solar and geothermal energy, and purchasing wind energy for its Oregon and California data centers. Apple’s commitment to renewable energy has helped set a new bar for the industry, illustrating in very concrete terms that a 100% renewable internet is within its reach, and providing several models of intervention for other companies that want to build a sustainable Internet. Download the full report. (Full disclosure: I have a relative that works at Apple.)

How Facebook Uses Energy    Facebook continues to grow and dominate the global social media landscape with 1.23 billion monthly active users. Facebook has made huge strides forward since 2012 to become one of the clear green internet leaders. Radical improvements in transparency and efforts to deliver significant wind energy investment in Iowa have helped drive Facebook into the top tier of companies creating the green internet. By building on the advocacy it has started with energy utilities to drive more clean energy investment, and continuing to find ways to bring renewable energy to scale to power its data centers in North Carolina and Iowa, Facebook is setting a clear bar for other major social media networks and internet companies to follow.

How Google Uses Energy Google has continued to lead the major internet brands in purchasing renewable energy at scale to power its massive online ecosystem. The company is now reporting electricity consumption of 3,315 GWh, with 34% of its operations powered by clean energy. Google’s use of power purchase agreements to procure clean energy has been adopted by others in the sector, like Microsoft, and it has successfully influenced utilities in Oklahoma and North Carolina to offer new renewable energy options by using its immense business clout. As Google expands its footprint to Latin America and Asia, it will need to maintain its innovative edge to make sure that it continues to source clean energy even in countries that feature dirty electric grids.

Twitter falls between the types of companies that are clearly innovating in their use of energy sources and those that fall into the dirty energy collection. Twitter’s has changed the way people around the world communicate. Twitter does not yet own any data centers of its own, instead renting data center space from others. The microblogging platform has remained silent about the type and amount of electricity that is powering those data centers. Twitter remains at the bottom of the industry for energy transparency, disclosing no information about its energy footprint. Twitter lags behind its competitors in social media, Facebook, which took significant steps to increase transparency and increase its use of clean energy soon after it went public.

And on the side of the spectrum are copies that fall into the Stuck in dirty energy past ways of providing and using energy. One example is Digital Realty Trust (DRT)  which is the largest digital landlord in the world, with 131 data centers worldwide, roughly three-fourths of which are located in the US. Digital Realty operates on the wholesale end of the colocation spectrum, providing both entire data center properties to large customers like Equinix and Amazon Web Services, and also renting portions of facilities to meet the needs of large online properties such as Facebook, Rackspace, Salesforce, Google, Microsoft and Yahoo.

So the question really is – as we build all this technology, are we really making the world a better place? We need / want technology to scale. But at what cost? CEO’s need to consider not only their new innovations in products and services, but also how they are leaving the environment. Are they leaving it in a better or worse state and at the end of the day, what’s the cost in the long run to these decisions.