Could Social Media Monitoring Have Saved Netflix & Blockbuster from Themselves? 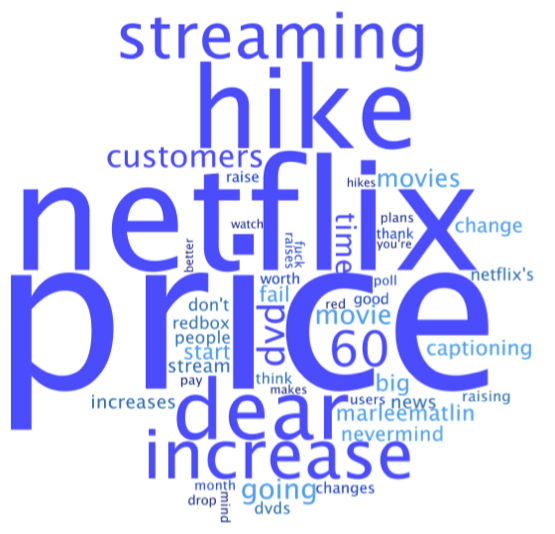 I teamed up with my friend Jennifer Tyler, @JenHowell4, at Sysomos and we did a little social media monitoring on the Netflix situation. One of the goals of this blog post is to show that data can be used to tell a story. When you tell a story, the audience listens.

Blockbuster’s Customers Didn’t Like the Delivery System Because It Involved Late Fees If we examine what was being said about Blockbuster in social media prior to bankruptcy, the negative conversation was around late fees. Clearly there was something not working about the delivery of movies. Customers had to come in, rent the DVD and remember to return them on time. Or else the “evil” late fees would consume their positivity around the brand.

But was Blockbuster listening? It doesn’t appear that they were “hearing” the feedback, at least not enough to shift their business model. Here’s a word cloud that can be generated via social media monitoring. It tells you what was being said about Blockbuster in social media. You can clearly see- in the word cloud- that the main jist of the conversation was about late fees. (In word clouds, the larger the words, the more times they are mentioned in social media.)

If Blockbuster was using social media monitoring, they could have seen that their customer sentiment was not positive. They could have clicked on the red part of the pie chart to understand what customer’s were upset about. By clicking on the graph they could choose to look at tweets, at blog posts, etc… that pertain to that negative sentiment.

But Blockbuster didn’t listen — or at least they didn’t hear and shift their business and had to file bankruptcy on Sept 23, 2010. You can see in the word cloud about Blockbuster’s bankruptcy, that Netflix is showing up in the conversation. Clearly something to pay attention to — when the word cloud is supposed to be about your business and your competitor is showing up in the same cloud! YIKES!

Social media monitoring can show you what is being said about your company. Below are clips that represent blog posts in social media about Blockbuster’s bankruptcy.

Conversations on the web about Blockbuster's Bankruptcy

And here’s customer sentiment around Blockbuster’s bankruptcy in tweets:

What you can do in social media monitoring is to click on the peak and then see what that is attributed to. In the upper, right hand corner, you can see the blog post by Netflix’s CEO Reed Hastings is what gave rise to the spike in social media and online conversations. The screenshot is of the Facebook post with a link to the CEO’s blog post. There are 81,789 comments. Out of those comments, there are 1,429 Likes. That’s about 1.7% positive responses.

If we do a word cloud on the same peak, we can see what the main topics are. That’s the group of words to the lower right. The key words are: Netflix, price, hike, streaming, dear…. It’s clear what the crowd is upset about. If we look at the lower left screen grab, you can see a buzz graph. The buzz graph tells you what words are being used in association with other words and the thicker the line, the more prominent is the use of the word. Those words are: increase, stream and redbox…

Here’s the actual blog post by Hastings— note that he ends the post with telling customers that they can cancel their services at any time.

Here’s some of the thousands of comments to the CEO’s posts, most all negative, about the changes to the Netflix services:

Despite the >23,000 negative comments on the blog on July 12, 2011, Netflix sent out a notice on the price hike on Sept 19th, 2011. What happens when you don’t listen or hear & you act without considering what customers think, feel and know? Customers were outraged… and the press picked up the coverage… If for no other reason than the press looks to social media for stories, companies MUST start taking social media seriously.

Press That Covered Netflix Price Change and Splitting Up the Company

And here’s some of the titles of the articles below. Companies work very hard to get coverage like this. Unfortunately, it wasn’t positive coverage.

Titles of Articles About Netflix

Sample of Tweets About Netflix Qwikster

And the three top words in the Buzz Graph?

And more stories from some great journalists:

Austin Carr, FastCompany: Netflix: What We’ve Got Here Is A Failure To Communicate

What was interesting is that I checked Blockbuster’s twitter handle… and guess what I saw? Blockbuster is NOW listening! They are offering 1 year subscription to the people who provide the best reason for leaving NetFlix:

What makes this whole situation even worse, like Stan at Mashable said… Netflix didn’t even check the twitter handle– @Qwikster. Someone else has it. Here is one of his typical tweets. It’s not “on brand” with Netflix and Netflix doesn’t own the twitter handle. (Note to companies- before you pick the name of a new company, go to Twitter and check to see if the name is available!!)

Deming On Steroids Maybe its good to listen to your customers. Deming said it years ago. Listen to your customers and employees. Take the feedback and integrate it into your company. What we have in social media is Deming on steroids. We have feedback that is honest, genuine, and transparent. What’s worse is that, like cave paintings, it is something that will last forever for whomever is searching to find it.

Did Blockbuster cross the chasm of it’s time? No. It’s customers were saying, “We want a different delivery system where we don’t get dinged for late fees.” It didn’t shift with the changes in the marketplace. Did Netflix take their spot. You bet. Did Netflix get arrogant? One would think that after >87,000 comments or 24,000 comments, that if the customer’s weren’t good with what was being proposed, and Netflix went ahead anyways, yes, it appears so.

What could Netflix have done better? Ask the customers what they think before making a declaration. Explain that to keep the company profitable and to keep delivering the streaming services, that there might need to be some changes. Ask, don’t tell is the VERY FIRST things good leaders learn in and out of business school. Asking vs telling would be a paradigm shift for most CEOs.

Netflix announced the deal with Facebook and Michael Drobac, director of Government Relations at Netflix is asking customers to help bring Facebook Sharing to the US. Has Hastings done so much damage that fans and customers will not rise to help? Did the apologies and explanations by Hastings help or hurt the company? Do you think Hastings understands what he did wrong?  Todd Wasserman of Mashable.com reported rumors of Blockbuster to launch a Netflix rival. Is it too late for Netflix?

A Social Media Teaching Moment What can we learn from this? Call it a “teaching moment.” We can conclude that’s its important to listen to our customers. It’s important that executives listen to customers and use that feedback to make good decisions. The information about a company that is contained in social media is real-time and real relevant. It’s your customers, your advocates, your influencers, your ambassadors, the press and your nay-sayers giving you their point of view. And it lives forever, it can go viral and change not only what customer’s think but also what investors think, as well as stock prices. Social media is clearly a medium, that if you don’t understand it, it can get you!

So where is your company in the adoption of social media? If it’s stuck, then perhaps consider social media monitoring. It will give you:

Where is Social Media Going? Many people are asking me what’s the next phase in social media? They’ve got their Facebook and Twitter handle and they are posting. They have somewhat of a content strategy and interaction plan. And they are trying to drive customers through a marketing funnel and help customers with their customer service issues.

The Third WAVE of Social Media Adoption The next phase, and maybe it should be one of the first phases, is to do social media monitoring. Why? A good case study in this is re: Netflix and Blockbuster situation. Where we are in the social media lifecycle is the Third Wave. Wave One was lead by the Innnovators. Wave Two was championed by the Early Adopters.

For social media to become the business-changing paradigm shift that it can be, it must win over the Early Majority. If that happens, then the business world would be entering WAVE Three, in the Social Media Adoption Curve. (I adopted Geoffrey Moore’s and Roger’s Diffusion Theory thought leadership around this concept.)

So what will it take to get the majority of the business world to buy into social media? The Early Majority are pragmatists. They want assurances that what they are going to do, is gonna work. They want business cases and they’d love to see ROI. One of the ways to show companies that social media matters is all of the above. And one of the best ways to create a business case is to do a little social media monitoring. At least that’s my take!

Don't do the Ostrich

Take your head out of the sand and cross the chasm

What’s your take on where business is in the social media adoption process?
Does this type of social media monitoring data make it easier to understand why someone should invest in social media? Love to hear your thoughts!

The Social Media Adoption Chasm - Don't Fall Into The Gap

@drnatalie Learn. Share. Grow!
Here’s more information to that might help you:
A link to the powerpoint presentation on slideshare: http://www.slideshare.net/doctornatalie/social-media-breakfast-club-and-sysomos-presentation-sept-22-drnatalie

Link to my white papers on the ROI of Social Media: http://newnewdrnatalienews.mystagingwebsite.com/blog/roi-of-social-media-white-papers-by-dr-natalie-petouhoff